One of the most heart touching traditions is Baba Marta Day celebrated in Bulgaria as the end of winter and the beginning of spring. Every year Bulgarians exchange martenitsi (red-and-white adornments) on the first of March and celebrate each other with the words: Chestita Baba Marta (Happy Baba Marta)!
First of March is also Imen den (Day of name) of all who are named Martha, Martin, Martina and Eudokia. Imen Den celebration is rooted in the Christian traditions, as a joyful and friends-connecting feast as the Birthday.
About Baba Marta etymology: Bulgarians name the old women “babi”. Grandmother is also in Bulgarian “baba”. Marta is rooted in the month of March. Baba Marta is imagined as a moody old woman. The sun shines when she is happy, and her anger brings cold storms. She is a human picture of unpredictable March weather. March storms are sometimes described as Baba Marta’s spring cleaning, and the last snowfall comes from falling feathers when she shakes out her mattresses.
The legend
Legends have grown around the holiday tradition. Perhaps the oldest describes the origin of the custom found in a kindness by Khan Asparuh, the founder of the first Bulgarian state, who is said to have sent his wife a white cord as a sign of having survived in battle.
Another tale describes how Baba Marta, angry at an old woman taking her goats into the mountains a few days early, brought on a fierce storm that raged for days. Later, when the townsfolk went out in search of the old woman, they found her turned into stone, with a freshwater spring running out from under her feet.
Baba Marta today
Today the holiday has become an opportunity to share good wishes of health and happiness with friends, family and colleagues. Children often compete to see who can collect the most martenitsi. 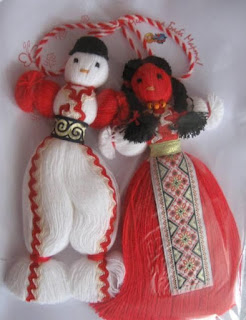 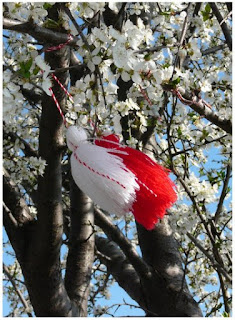